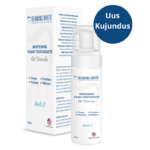 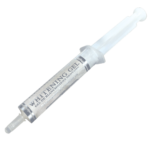 Minerals Enamel Booster, reduces tooth sensitivity
4.91 out of 5
( There are no reviews yet. )

Teeth whitening foam Daily White Fusion is manufactured and produced by Beaming White and is perfect for your teeth whitening.

It is a cleansing and teeth whitening foam that does not damage the tooth enamel or cause tenderness as it does not contain hydrogen peroxide. Used in daily teeth brushing, in the morning and evening, instead of a regular toothpaste. Teeth whitening will show effects already after a few days of use. Recommended especially after you have completed teeth whitening procedure with the Beaming White home kit.

Removes plaque from teeth and freshens your breath.

“Daily White Fusion” teeth whitening foam is excellent to use instead of your daily toothpaste. Gently cleanses your teeth. Teeth whitening home kit by Beaming White goes really well with their foam.

Interesting facts about toothpaste from history!

Earliest hints to toothpaste are from the 4th century Egypt, which describe mixtures of iris flowers. Greeks and Romans developed a further developed the concept of toothpaste by adding bone and shell dust. Persian musician, chemist, botanist and geograph Ziryab supposedly invented a specific toothpaste in the 9th century, which exact ingredients are still unknown, but it has been described that it fulfilled its function and tasted well. It is unknown whether these early toothpastes were scrubbed on teeth with fingers, cloth or some basic toothbrush, for example using a tree branch.

A toothpaste recipe from the 18th century contains charred bread and cinnamon. By the year 1900 a toothpaste was invented which consisted of hydrogen peroxide and baking soda. It was recommended to be used with a toothbrush. Such initial and basic toothpastes were started to be marketed from the 19th century, but they did not become popular before the First World War. At 1982 doctor Washington Sheffield created a tube for toothpaste. The inventor got the idea from his son who saw paint tubes on his trip to Paris which were used by painters. At 1896, Colgate & Co started manufacturing toothpaste in similar tubes in New York.

Fluoride was first added to toothpaste at 1914 . During the 1930s the American Dental Association was critical about it, but since the 1950s fluoride has been accepted in toothpastes. First fluoride toothpaste went on sale at 1955 and it was named “Crest”. At 1960 the American Dental Association confirmed that “Crest” helps avoid teeth decay. How much fluoride is in each toothpaste depends on the country, restrictions, regulations and so forth. For example, in many African countries the amount of fluoride is much higher in toothpastes than the ones sold in America.

In June 2007 the US Food and Drug Association and many associations in Panama, Australia and Puerto Rico to avoid toothpastes from some brands that manufacture products in China with a toxic ingredient diethylene glycol (DEG). This chemical is used in anti-freeze products as a dissolvent. It is known to cause liver and kidney damage, in worst cases it can be deadly.

Fluoride different forms are most used in toothpastes which goal is to prevent dental cavities. Although certain plants, animals and water bodies contain fluoride it is not considered a vital component for life.

There are no reviews yet.

Show reviews in all languages (33)

Pump the bottle 2-3 times and place the foam on a dry toothbrush, was your teeth for 1-2 minutes. Spit out the foam but do not rinse your mouth. Do not eat or drink anything for the next 15 minutes. Do not use more often than two times a day.

Contraindications: Keep away from children. Not to use if under 18 years of age. Keep out of eyes. The teeth whitening foam does not whiten laminates, tooth fillings or tooth crowns.