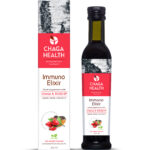 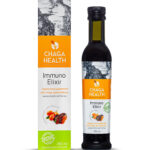 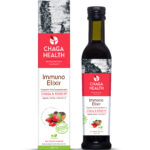 Rosehip Chaga immuno elixir – VEGAN ORGANIC
0 out of 5
( There are no reviews yet. )

Immuno Elixir strengthens the immune system of both adults and children. Immuno elixir is a powerful drink with a high content of vitamin C, which contains strong active ingredients such as vitamin C, chaga extract, blackcurrant and several Nordic herbs. The components we use in the Immuno elixir are well known in folk medicine, but research has shown that they have a restorative, strengthening and disease-preventing effect. All components of the elixir are aimed at strengthening the immune system – it keeps us healthy and protects against diseases.

One of the powerful antioxidants is the medicinal fungus chaga, or black swallow, which grows as a bulge on deciduous trees. In addition to folk medicine, the healing and anti-inflammatory effects of the black swallow are confirmed by various scientific studies. Chaga contains, for example, B vitamins, flavonoids, phenols, copper, calcium, potassium, manganese, zinc and iron. One of the important mechanisms in the development of diseases is oxidative stress and therefore also the ability to resist it, or antioxidant. Illness and the treatment of diseases can be influenced through the consumption of antioxidants.

Rosehip can cure metabolic disorders and cardiovascular diseases. Rosehip preparations have a stimulating effect on urinary and bile secretion, a general strengthening, anti-inflammatory and atherosclerotic and bleeding-stopping effects, they regulate the acidification processes in the body, increase hormone synthesis, enzyme activity and tissue regeneration. Increase the body’s resistance to adverse factors in the external environment. Rosehip is very high in vitamin C. Rosehip is an effective helper in the prevention of gastric and duodenal ulcers, gynecological diseases, avitaminosis, hypertension and atherosclerosis, in many acute and chronic diseases when accompanied by vitamin C loss. Rosehip is used for infectious diseases, anemia, fractures, potency enhancement, sleep disorders, bronchitis, tuberculosis, bladder stones, gastritis, gastric juice deficiency and fermentation deficiency, kidney and bladder diseases and edema.

It has been observed that the addition of iron grass to the menu has improved the immune response. Iron grass has been used in folk medicine to treat rheumatism, muscle aches and wounds, and its antimicrobial activity has also been confirmed by scientific research.

Inflammations are usually caused by bacteria or fungi. Research has shown that pine oil has anti-inflammatory effects and contains compounds that stimulate the immune system, making the body less susceptible to disease.

There are no reviews yet.